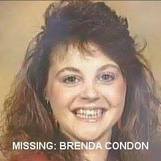 Last Seen: February 27, 1991 at her place of employment at Carl's Bad Tavern (owned by "Crazy" Carl Easterling, who also owned the Brickhouse in State College, PA) located along State Route 550 approximately two miles north of Bellefonte, Pennsylvania near Interstate 80 (Spring Township in Centre County).   Condon was employed as a bartender and was last seen by a patron at the bar on February 27, 1991 between 12:45 and 1:15 AM (by various accounts) talking to an unknown man at the bar.

Condon had worked at Carl’s Bad Tavern a short time when she disappeared. She was to close the bar after last call that night and reopen a few hours later as the day shift bartender, with her shift due to end at 6 PM.  During the day time shift a cigarette vending machine serviceman walked into the unlocked bar, restocked the machine and departed without realizing anything was amiss.  When Condon’s relief arrived at 6 PM for the night shift he noticed her car, a gray 1986 Mercury Capri (similar to the one below), was in the parking area but she was not present.

The bar appeared undisturbed and there were no obvious signs of a struggle. Condon's cowboy boots were found by investigators in the men's restroom of the bar, undisturbed.   It is unknown how this occurrence is related to her disappearance.  No evidence of any other crime was detected during the investigation.  Her purse and car keys were never recovered. 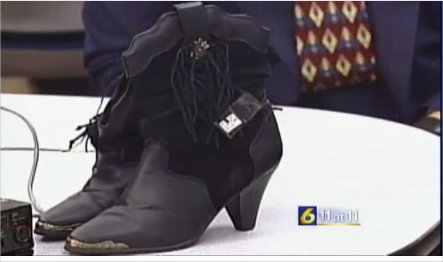 Condon was reported missing to police the evening of Feb. 27, but the search did not begin until March 2. Condon was scheduled to pick up her two children in Clearfield, where she is originally from, on March 2 for visitation. When she failed to arrive, police began the search.

Condon is the mother of two children, 10 & 12 years old at the time. In addition to being involved in her children's lives, Brenda Condon ran two arms of a cleaning-service franchise, one in Williamsport and one in State College. Only a few months before she disappeared, she moved from Williamsport to State College to be closer to the homes she cleaned and to be closer to her children.

An extensive search of the area was conducted in the search for Condon.   Local and state police claim to have conducted numerous interviews over the years with no solid results. A state police investigator has publicly stated that there a few people in the state who may have helpful information but they have stopped talking to police.  “We do have some suspicions…there’s two or three that we’ve spoken with that we’d like to ask some more questions of, but they don’t want to talk to us anymore.”

These composites are of men who were allegedly at the bar on the night of Brenda's disappearance. Police have not been able to identify these individuals, who are wanted for questioning.

White male who was approximately 50 years old and 5'8. He was wearing a short dark jacket; dark slacks; and a brown plaid shirt

Carl's Bad Tavern was formerly located along State Route 550, approximately 2 miles north of Bellefonte, PA near Interstate 80 in Spring Township in Centre County. It is now the site of the Robin Hood Brewing Company at 1796 Zion Road. This is 12 miles from Penn State University).
Powered by